The government Architect prepared plans and invited tenders (quote) for building the school. Mr S W Brown was accepted with the quote of 1,850 pounds.

The building was completed and opened on 22nd November, 1937 with Mr Oscar Swanson as teacher.

The first weeks enrolment was 53 by the end of term there were 58.

1939 saw the number of pupils increase to 94. By 1956 there were 202 and in 1962 the number had reached 600. The numbers continued to grow due to the development of the area as new estates and housing were established.

History of the Area

The Duruk people were once the owners of local land. The area now known as Doonside was named Bungarribee (Bung meaning the 'creek' and garribee meaning 'cockatoo'). Prior to European invasion in 1789 the area was a beautiful self-sufficient environment.

In 1802, Governor King reserved a large proportion of Duruk land for a Government Stock Reserve. The next twenty years saw Doonside as grazing land for cattle and sheep owned by convict herdsmen.

In 1823 Aboriginal owned land was granted by Governor Brisbane to Scottish immigrant, Robert Crawford. He named this grant Doonside after his family home in Scotland, which was known as the River Doon.

There was no electricity until 1929 and water was drawn from wells. Horse drawn carts would deliver bread and meat.

Blacktown, NSW was visited by train as there weren't any buses or schools. Parramatta NSW and Penrith NSW, were the nearest high schools.

A store and post office were opened unofficially in 1926 by Bill Francis on the corner of Hillend Road and Cross Street. For some years his nephew Jack Francis operated the post office on the other side of the railway line but once it was made official it returned to its original site until 1987.

In 1955 electric trains came to Doonside and Edith Crawford, being the oldest inhabitant, was given the privilege of 'cutting the ribbon'. Her death was in 1956.

At the time of World War 1

Prior to 1916, the only development at Doonside was confined to the Crawford family. The Crawford homestead was on the south side of the railway line facing Doonside Road. Kelburn Crawford's daughters house, was between the homestead and Bungarribee.

North of the line on the corner of Hillend Road and Doonside Crescent, was a brick cottage owned by the Italian family, Luparno. Opposite was a small gatekeepers cottage.

A workman's timber cottage was on the hill towards the tileworks' site.

The only road into Doonside was Doonside Road, running from Western Highway. Hillend Road only went as far as Power Street after which there was a track to Richmond Road ending in a gate.

Power Street went to Plumpton with the crossing over Eastern Creek being rough and dangerous in wet weather.

After the war (1914-1918), the company of Porter and Galbraith bought property from Crawford and erected tileworks (PGH). A soldier's settlement of about twenty poultry farms was established between the railway line and Bungarribee Road. Part of this land, during the 1930's depression, became a woman's settlement.

Return to top of page 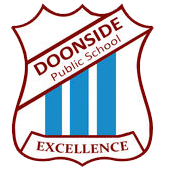 We acknowledge the Traditional Custodians of the lands where we work and live. We celebrate the diversity of Aboriginal and Torres Strait Islander peoples and their ongoing cultures and connections to the lands and waters of NSW.

Copyright for this website is owned by the State of New South Wales through the Department of Education. For more information go to https://www.dec.nsw.gov.au/footer/copyright.